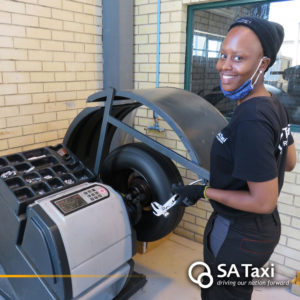 Meet Kgathliso Sedibane who is currently doing her apprenticeship as a diesel mechanic at SA Taxi. Kgathliso has been with SA Taxi for more than a year and says she is thoroughly enjoying her time with us.

“I have learned so much since working here and I have become more confident in my work.” She says.

“I was so impressed by her and I just knew that’s what I wanted to do” she explains.

This was met with encouragement from her mother who supported her career choice – after asking if she was sure, of course. Following that, Kgathliso enrolled at the Sekhukhune TVET College where she was one of only two female students in her class. That was the beginning of her journey in the male-dominated industry.

She says that it was intimidating being in a class full of men who knew way more about cars than she did.

“I felt a lot of pressure because I felt like I didn’t know much about cars,” she says.

According to her, that kind of pressure does not exist at SA Taxi, where she feels like she is treated as an equal. Kgathliso, who hopes to open her own workshop one day, says that she would be happy to stay at SA Taxi beyond her apprenticeship because of the confidence she has developed since working here.

Kgathliso, thank you for your contribution to driving the nation forward.

SA Taxi have partnered with Safeline to bring the safest, most durable brake pads in ...

When you buy a new Toyota Ses’fikile, you can choose between a minimum zero deposit(risk ...